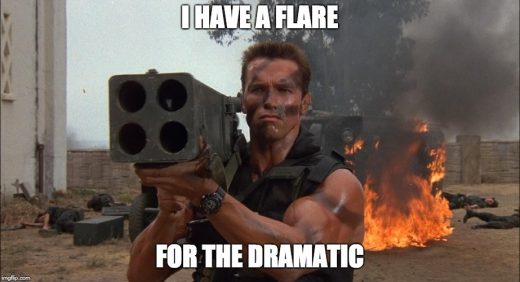 Mr. Potatohead went to the oncologist. They assured him “It’s not a tuber!”

When asked who he’d like to play in the upcoming summer blockbuster about classical music, Arnold Schwarzenegger replied – “I’ll be Bach!”

When working as an usher in a theatre, he was approached by a patron bearing ticket B-75. Arnold pointed and said – “Aisle B… back!”

When his Islamic shawarma-meat got overcooked, he complained to the falafel-man – “Halal be black!”

When eating lobster and his bib got pierced by a wayward auger, Arnold was quite annoyed. He said – “Awl… bib – ack!”

When asked whether he feared Nazism would make a comeback, he gave an anxious look and said – “Heil be back!”

When asked by the grocer what kind of cheese he wanted and in what form, he replied – “All brie; block!”

When asked whether there would be another pink-eye epidemic, he replied – “Eye’ll be back!”

When asked what his favourite Asian stew was, he said – “Old bean bok-choi!” [ok that’s quite enough]