The idea of monkey doctors is very ape healing. 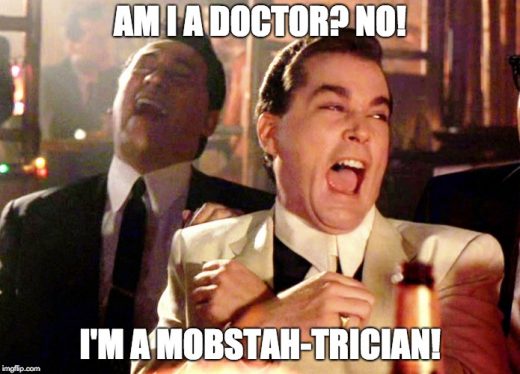 My doctor recommended I treat my benign tumours by injecting them with live insects.

I refused, but he was in cyst ant.

The journalist refused to see a doctor. He didn’t want to reveal ass-sores.

Who should you see if you don’t get your period? A periodontist.

Want to take a walking tour in Egypt? Better consult a Cairopodist.

Pathologists always get the coroner office.

As a medical doctor, I will never refuse treatment, except to a drunken Kanye West: that’s my hiphop erratic oath.

Which doctors are the best interior decorators? Room-atologists!

When do some doctors talk about the weather? Whenever they meet a urologist.

Gastroenterologists always lose at scrabble because they get stuck with all the bowels.

The cancer specialist never gets to sleep, because he’s an on-col-ogist.

Surprised at the number of doctors who were murdered in 2004? Not at all, we’ve been expecting the surgeon homicides!

Which comedian will donate his bones to science? Red Skelton.

Why did the Spanish Inquisition punish unbelievers by forcing them to drink coffee? Because caffeine is a die-heretic!

Did you hear about the red-nosed doctor who prescribed beer for every alement?

Did you hear that Coca-cola has finally hired a staff fizzician?

The war hero went to an animal hospital; he insisted on seeing a veteranarian.

Which drug has puzzling side effects? Ritalin

Why does the ophthalmologist prescribe selective serotonin reuptake inhibitors? Because it’s his job to assess our eyes! (SSRIs)

The patient was dogged by shitzuphrenia.

Which nerve is responsible for massive erections? The crane-ial.

Who never interrupts? An in-turn!

Who specializes in men’s necks? The guy-neck-ologist!

Ed: “Did you know the author of ‘The Raven’ died from an avoidable case of malnutrition?”
Ned: “Tragic. Would he have been saved by a nutritionist, perhaps?”
Ed: “No, although a foot doctor could have helped.”
Ned: “Really?
Ed: “Yes, Edgar Allen needed a Poe Dietrist!”

The doctor had to paint Easter eggs before making his dye-egg-nosis.

The raggedy sponge toy had a simple case of frayed nerfs.

Which STD is terminal? Goner-rhea!

The stunt pilot could no longer perform aerial tricks after being diagnosed with loopus.